President Lee Howard called the meeting to order at 5:20 PM. 114 members and guests were present.

The minutes of the January 15, 2020 meeting were approved. The names of the new BOD officers were read and approved.

Treasurer Mary Mann gave the Financial Report and stated the current balance in the club’s bank account is $5,866.26.

Fiesta chairperson, Jo Keitges stated that the income from the Fiesta was $1500 with expenses yet to be calculated.

Acknowledgement of teacher, Keka Wessman who is retiring at the end of February. Introductions and thanks to new members, teachers and helpers.

Paul Voorhees discussed the Cuba trip ( March 16-30) and how basic necessities needed by Cuban citizens can be packed in checked luggage. A list of those suggested items will be provided to classes and on website.

Jo Keitges presented the date for the next Fiesta (April 15th), and plans to send out info 2 weeks before. Reminders and requests for volunteers will also be sent out.

The meeting was adjourned at 5:43 PM.

President Lee Howard called the meeting to order at 6:02PM.  Present were 104 members.

The minutes from the previous general meeting were approved by acclamation.

Member positions were discussed, including the current need for a Membership Chair.

Dolores Hudson, our outgoing Treasurer, was thanked for her continuing service to the club in many capacities.

The following club officer slate for 2020 was approved by the membership:

Tickets for the January Jazz concert were announced, and available now to members.  They are $20 each, for either the afternoon or evening performances.

A new class based on the Destinos program was announced for 2020.  Members need to sign up as the class is limited to 20 people.

The Spanish immersion trip to Seville, Spain was discussed.  Members should contact Eleine Greene to sign up.

The Cuba trip was briefly discussed, noting that there are 15 club members going on March 16, 2020.

Six gift baskets were given away based on a drawing.

The meeting adjourned at 6:31PM.

President Lee Howard called the meeting to order at 5:51PM.  Present were 124 members.

The minutes from the previous general meeting were approved by acclamation.

It was announced that the Holiday Fiesta would now be held on December 10th at the RHJohnson Social Hall.

A reminder was given that the Mexican Train board game would be at 1PM at the Chicory Room at Beardsley.

Board members and teachers were introduced so new members would know who they were.

The meeting was adjourned at 6:04PM.

President Lee Howard called the meeting to order at 1:13PM.

The Treasurers Report and the previous general meeting minutes of April 12, 2019 were approved by acclamation.

The current Board members were recognized:

Other volunteers that assist with club functions were also recognized:

The current slate for 2020 Club Officers was provided:

Jo Keitges described the upcoming fiestas and explained the role of and need for volunteers to make them successful.

Jim Khami talked about the club travel opportunities and mentioned the travel meeting on October 24th to discuss future travel.  Paul Voorhees addressed the planned trip to Cuba in March of 2020.

Eleine Greene discussed the plan for a Spanish language immersion experience in Seville for 2020.

The general meeting was adjourned at 1:46pm, and class registration was then discussed for those enrolling in language classes.

The meeting was called to order at 6:12PM by President Lee Howard. Approximately 120 members were in attendance.
There were no additions or corrections to the minutes of the previous General Meeting, and a motion was made and passed to accept the minutes as submitted.

Jim Khami provided an overview of the club’s Mexico City trip of April 1-7, 2019.  He stated it was a great success and that all 22 participants enjoyed the trip.

MaryAnn Jasken provided an overview of classes being offered for the Summer.  Everyone had received the schedule for the classes.

This general meeting was held in conjunction with the Holiday Fiesta.

The slate of nominees was accepted by voice vote and will take office at the beginning of 2019.

There being no further business, the meeting was adjourned.

This General Meeting was held in conjunction with the Fall Fiesta.

Paul Voorhees called the meeting to order and the following items were presented.

There being no further business, the meeting was adjourned. 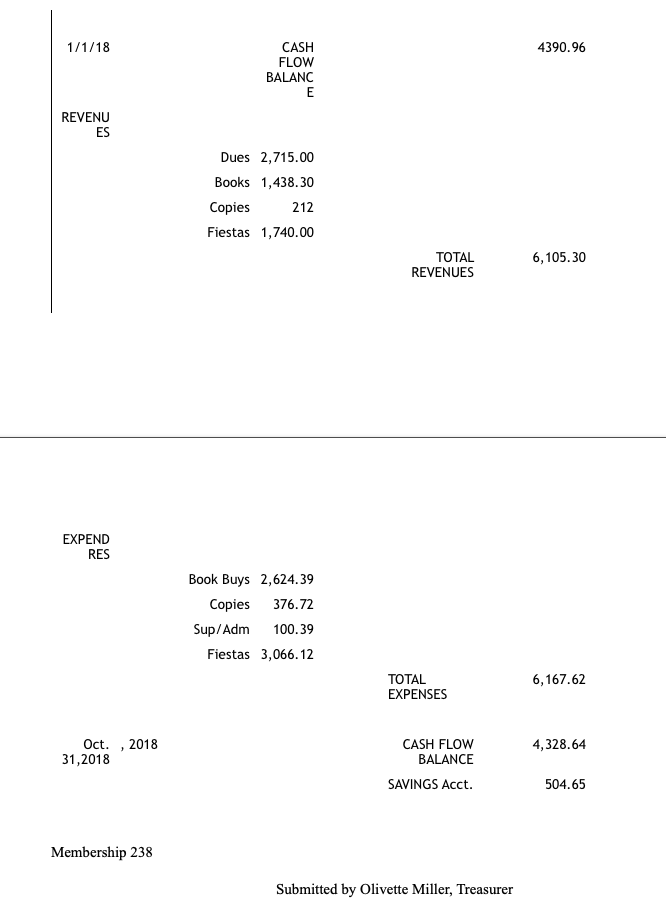